He made his first appearance in Bizarre Adventures of Hakumen Episode 1 "Power of Friendship". He met Hakumen, who had just been beaten by the trap, Mai Natsume. Then, they used the power of friendship to return to the real world and beat the shit out of Mai Natsume.

He appears again in episode 4 "Edgelords" when Mori teleported him to the Hell for Edgelords for being a rebel. With the help of Hakumen and Adachi, he got out from Hell and beat Mori. 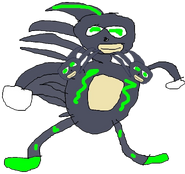